"You've discovered another defunct Claptrap robot. Could there be an unused repair kit somewhere in this town?" 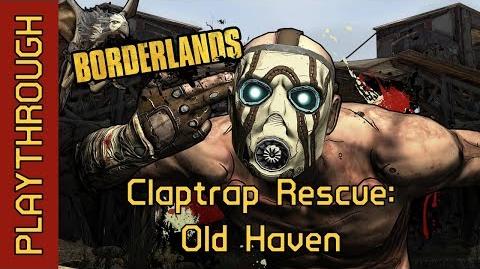 The Claptrap can be found inside a building near the south west section of Old Haven, just east of the junk yard torch that is required for the "Smoke Signals: Shut Them Down" mission. Several Crimson Lance units wander around this area. The first image shows the map location of the Claptrap, while the second shows the in-game area.

Return to the Claptrap to receive the Backpack SDU.

"Funny, how just when you think life can't possibly get any worse it suddenly does. I think you ought to know I'm feeling very depressed. A guy finally gets a break from all the shooting and raping. Oh yes, these are desperate men. Just when he's having a rest, you come along and repair him. I suppose you want a reward for exposing me to more of this torturous existence."