"You've discovered another defunct Claptrap robot. Could there be an unused repair kit somewhere out here?" 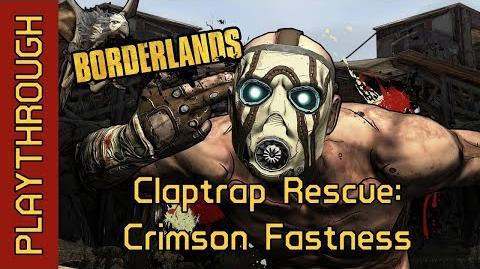 Find a repair kit and return to the Claptrap robot.

The Claptrap in the Crimson Fastness is easy to find. He is lying with a bunch of other broken Claptraps in the first main room of the area. After clearing out all the Crimson Lance, including a turret, go to the back of the room where the turret was and talk to the blue Claptrap.

Upon returning the Repair Kit, the Claptrap will open up a door leading to 2 weapon chests, multiple lockers and money cases, and a few ammo chests. The back door will also give you a very easy path to your main mission objective.

"Thank you kindly, stranger! The Crimson Lance have no tolerance for perfectly innocent robots, such as yours truly, who wander into other people's bunkers and then get lost through no fault of their own. Here's a small gift to show my undying gratitude."