Clan War: Zafords vs. Hodunks is an optional mission in Borderlands 2, and the final chapter in the feud between the Zaford clan and the Hodunk clan. Mick Zaford and the Zaford Grunts have met with Tector & Jimbo Hodunk and the Hodunk Grunts in The Dust, and they stand with guns drawn at the connection to Lynchwood. Only one clan will be victorious.

"The family feud has reached a boiling point. The Zafords and the Hodunks are preparing for a final showdown, and Ellie has asked you to be there. Only one family can survive this battle, and it is up to you to decide which one."

The Zafords and Hodunks all start out as targetable, but non-hostile. Vault Hunters side with either group by firing the first shot at the enemy they choose to eradicate, at which point the other group becomes allied.

After Playthrough 2 especially, Mick can be a fearsome opponent. He can make himself nearly invisible and deals extensive damage with his SMG, and while his Zaford Grunt minions can provide a Second Wind, they tend to flee for cover quickly. When fighting the Zafords it is best to eliminate Mick as soon as possible, and not allow his shield to recharge. Using Law and Order can be quite effective, as Mick's melee is slow and not too strong.

Tector & Jimbo operate as a single entity with Jimbo perched on Tector's shoulders. Tector fights with a shotgun, while Jimbo throws grenades. If Jimbo is killed, Tector becomes "Grieving Tector" and in this form is able to both lob grenades and use his shotgun.

The added firepower of a vehicle is very useful in this fight. However, it is very easy to lose the vehicle if it gets too close, especially when fighting the Zafords.

"With Ellie's help you brought the Zaford/Hodunk clan war to a bloody, but appropriate end." 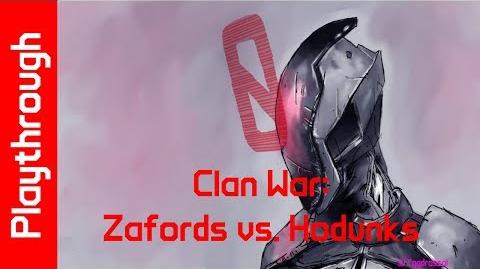 Retrieved from "https://borderlands.fandom.com/wiki/Clan_War:_Zafords_vs._Hodunks?oldid=435252"
Community content is available under CC-BY-SA unless otherwise noted.