Clan War:
End of the Rainbow

Clan War: End of the Rainbow is an optional mission in Borderlands 2 given by ECHO Recorder in The Holy Spirits. It becomes available after Clan War: Reach the Dead Drop is complete.

"Tector Hodunk has asked you to retrieve a dead drop, which hes left for you out in The Highlands, that details your next move in the ongoing Hodunk/Zaford clan war."

The Hodunks send the Vault Hunters after the Zaford's cash stash hidden in Ale Wee Cavern. The objective is to follow Peter Zaford, the bagman, down into the cavern while remaining undetected. Shooting or getting too close in proximity to him will cause the mission to fail. Once the bagman has reached his destination, it's time to bag the bagman and snatch the cash.

The bagman is a midget armed with a corrosive Oberkil! shotgun. He also drops corrosive grenades and wears a version of the Pot O' Gold, a booster shield that drops money when damaged. He can teleport short distances and uses this tactic in conjunction with his corrosive grenades to leave a live grenade behind when he vanishes.

There are also ten ammunition crates in Ale Wee Cavern that are packed with money. Locating and opening all of these will complete the optional objective. The chests must be opened before the key is inserted into the final lock for the mission completion, or the supplementary objective will become unavailable.

"The Zaford cash stash has been snatched." 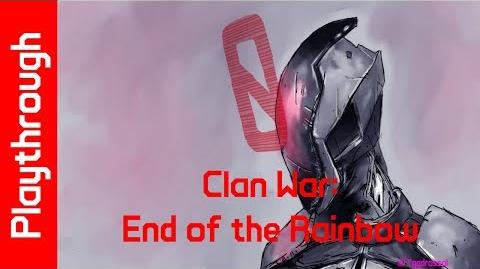 Clan War End of the Rainbow
Retrieved from "https://borderlands.fandom.com/wiki/Clan_War:_End_of_the_Rainbow?oldid=477863"
Community content is available under CC-BY-SA unless otherwise noted.