Borderlands Wiki
Register
Don't have an account?
Sign In
Advertisement
in: Borderlands missions, Side missions, Circle Of Slaughter missions
English

Circle Of Slaughter: Meat and Greet

Circle Of Slaughter:
Meat and Greet

Circle Of Slaughter: Round 1

Circle Of Slaughter: Meat and Greet is an introductory mission for the Circle of Slaughter arena matches in Borderlands. This optional mission becomes available on Middle Of Nowhere Bounty Board only after the completion of its repair.

"Think you've got what it takes to be a gladiator? Forget those puny Circle Of Death events my weakling brother puts on, this is where you'll find the REAL action! Talk to Chuck Durden, if you think you got what it takes." 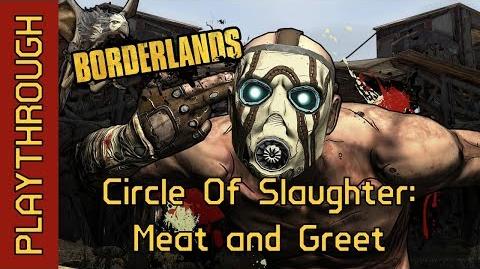 The Circle of Slaughter lies to the south of the Outeryard. Using the Outeryard as a start point, simply grab a Runner and drive south to the barricade entrance to a bandit camp near the arena. There are spiderants hidden in the road along the way, but these will not emerge unless the travel pace is slow. Activating the boost allows the Runner to rocket past the spawn points without a fight.

The barricade screening off the bandit camp from the road is easily negotiated on foot, and progress through the area will draw the attention of a number of bandits. This is also the area in which the submachine gun parts for the Scavenger: Submachine Gun mission are located.

A gate at the far end of the camp remains closed throughout much of the fight, although this will open once combat has progressed close to it and the bandits in the hollow have been despatched.

Turning in the mission disables the bandit spawns in this area and future progress to the arena gate can be conducted challenge free.

"You think you can hold your own on the arena floor? Come and talk to me any time you want to enter the fray and make a name for yourself. Put on a good show, and you'll be well rewarded."