This is a short mission which involves killing Pyro Pete, then finding the kidnapped sponsor.

Pete has a very powerful shield and twin flame throwers for armaments. While not an exceptionally fast enemy he will persist in jogging into close range where his incendiary weapons can wreak havoc on unprotected flesh. His weapons will not reach distant targets. Despite his close range effectiveness, Pete's attacks are troublesome for him to hit targets within arms reach, thus melee strategies can prove as effective as trying to stay out of reach.

Equipment considerations for using against Pete differ from equipment considerations for most other combat situations. His incendiary attacks may be volatile on flesh, but are less effective on shielded targets, resulting in a much higher precedent for a powerful shield than normal. Adaptive and booster shields both have merits, and shield-enhancing skills and class mods are invaluable, as are any elemental resistance sources against incendiary damage. A shock weapon is also recommended to quickly deplete Pete's shield.

The destruction of Pete's shield heralds another phase of combat when a number of small spiderants pour into the arena. These are not particularly tough or hazardous, and can largely be ignored until such time as they are needed for a second wind.

Once Pyro Pete has been killed, a crane in the arena becomes available to access a ventilation shaft that leads to a room holding Pete's captive. 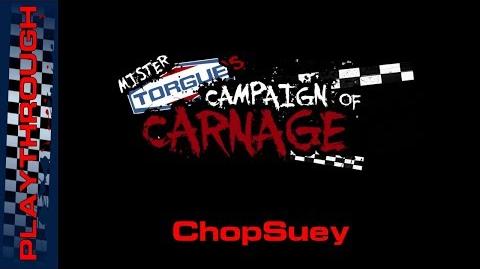 ChopSuey
Retrieved from "https://borderlands.fandom.com/wiki/ChopSuey?oldid=459368"
Community content is available under CC-BY-SA unless otherwise noted.