View source
watch 02:07
Borderlands 2: Captain Scarlett and her Pirate's Booty Trailer
Do you like this video?
Play Sound 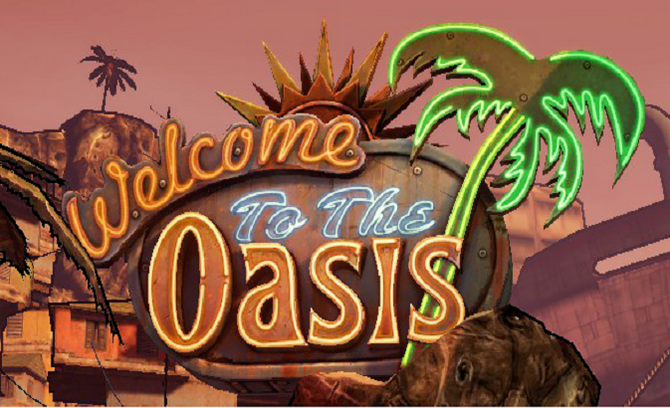 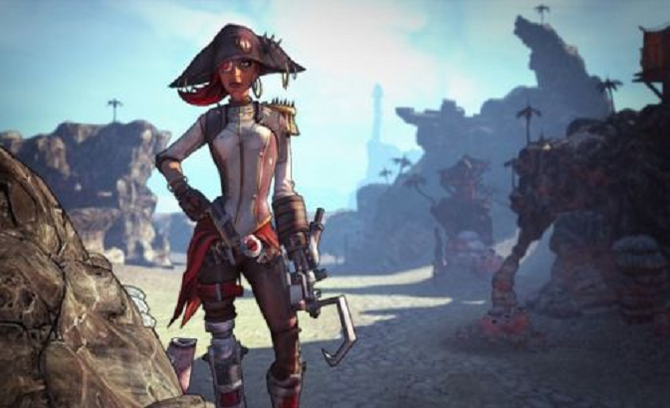 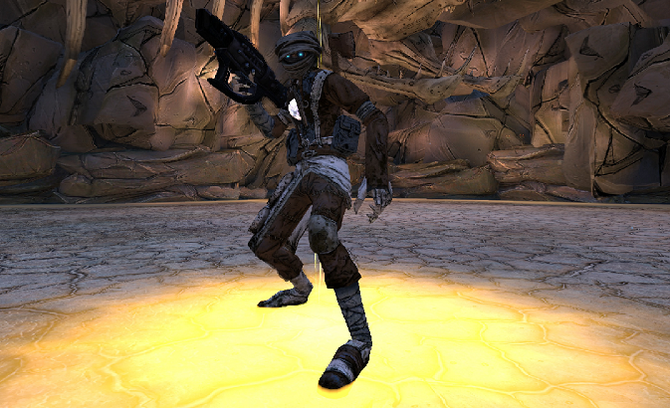 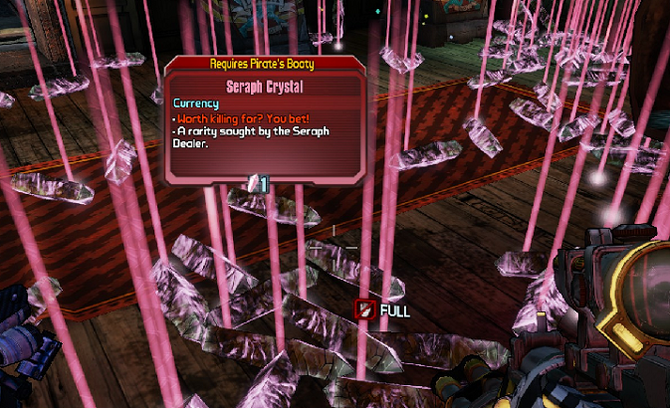 And ye may lay to that! 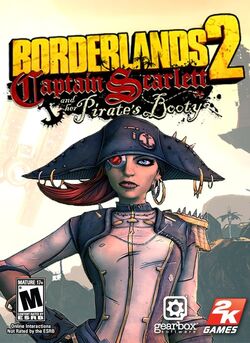 Captain Scarlett and her Pirate's Booty, by Gearbox Software and Triptych Games, is the first in a series of downloadable expansion packs for Borderlands 2. The Expansion was announced on October 11, 2012, and was released for PC, Xbox 360, and the PlayStation 3 on October 16, 2012. This DLC's size is 1.29 GB.

The level of the initial area is set when the town of Oasis is first visited, but in Normal Mode is at least 15 and at most 30.

As spoken by Marcus Kincaid at the start of the DLC:

Legends speak of Captain Blade's Lost Treasure of the Sands, of a prize so great that men would turn the sands red in pursuit of it; of a pirate queen, courageous and deadly, who would stop at nothing to find it; of a monstrous Leviathan; of the Vault Hunters who journeyed to the desert town of Oasis, not knowing the horrors that would befall them.

The story begins with Marcus telling another story to an orphan boy about the Treasure of the Sands. The Vault Hunters, having been notified of a secret treasure, travel to Oasis, a small ocean side town that suffered the same affects as the Parched Fathoms from the first game. They find the town being pillaged by Sand Pirates who are trying to steal the town's remaining water. After dealing with the pirates, the Vault Hunters meet Shade who, being deranged due to the drought and his loneliness using the corpses of the other townsfolk as company. He tells them to find Captain Scarlett who also has an interest in the treasure and of course plans to double-cross the Vault Hunters after they find the treasure. He tells them they need a Sand Skiff to reach her, He lends them his but it suddenly brakes down. They must find the needed parts from Shanks 'friends' to repair the vehicle. The find the last parts near a Sand Worm colony, the Queen Sand Worm steal the parts and must be killed to claim the part. After claiming all the parts and repairing the Sand Skiff, the Vault Hunters head to Wurmwater, where Captain Scarlett is located.

They find her ship, only to be attack by a band of Sand Pirate outcasts. After dealing with the bandits, they meet Captain Scarlett who kills one of her crew for an unknown reason. She tells them that the treasure can only be located using a special lens called the "compass" which was split into 4 pieces. She has the first piece with her old cohorts having the others. They first must hijack a Hyperion caravan that is transporting cargo to another outpost. they obtain the fragment and then proceed to Hayter's Folly to find Sandman's piece. while traveling through the cave, Shade (who hacked into the Vault Hunters ECHO noticed a large spring filled with fresh water.) They find Sandman who is accompanied by a pirate named Big Sleep fight the Vault Hunters. They then kill Sandman and his goons and claim the next piece of the compass along with a personal ECHO from Sandman.

They then must head to the Rustyard's, an array of ruined cargo ships from before the drought to find Herbert, who Scarlett hates deeply due to his over reactive love interest in her. They find Herbert and he offers to give them the location of the last piece, though they must first find Herbert's ECHO's of him recording Captain Scarlett. They find a small boat tangled in chains. Getting close to the boat suddenly triggers an explosive that Scarlett claims she had set up to possibly kill Herbert to finally remove her hatred of him and it scatters the ECHO's around the area. After returning the recorder's to him he tells them that the forth piece to the compass is in the chest next to his home. The Vault Hunters have to shoot the lock off of it due to Herbert losing the key to it. They shoot off the lock only to find the compass piece destroyed by their bullet. Herbert tries to find a way to repair and gets an idea of using poly-kryten from the old Hyperion refinery nearby. Fighting through the run down yet still operational factory, they come across a large loader bot called H3RL-E (a reference to WALL-E). After collecting enough poly-kryten, they then return to Herbert who fixes the compass piece. They take the part, and give a "gift" from Scarlett, which turns out to be a bomb which kills Herbert if it is given to him.

Returning to Scarlett, the complete the compass, and must head to the Magnys Lighthouse. They find the entrance blocked by Sand Pirates. They open the way to the lighthouse. Finding the lighthouse far above on a island showing how high the water once was in the area. Fighting through numerous Sand Pirates, they find an elevator to the top of the island. Finding the elevator slowly lowering, they come under attack by more pirates they must fight until the elevator arrives. Taking the elevator to the top, they enter the lighthouse and realize that the compass is in fact the old light bulb for the lighthouse. The lighthouse shines on a patch of sand in Wurmwater. Scarlett finds the spot, but betrays the Vault Hunters and sends her crew to attack the Vault Hunters, intending to acquire the treasure for her own gain. She then proceeds to the spot, only to be suddenly cut off. After fending off Scarlett's crew, the Vault Hunters head to the same spot only to attacked a eaten by a large Sand Worm. They find out that its the Leviathan that ate them and Scarlett. Trying to find a way out, the Vault Hunters find Scarlett in the monster's stomach. They find out that Scarlett's old pet named Rosco which is a Rakk Hive was in trapped there the whole time. They battle Scarlett and kill her pet only for her to escape using a teleporter, while dropping her gun in the process. They find a way out of the Leviathan and must fight it to gain access to the treasure. They kill it and find the treasure room after traversing the monsters arm leading to the treasure room. They find the treasure room and loot it, marking the end of the DLC.

This is a list of features announced by Gearbox Software:

Captain Scarlett and her Pirate's Booty includes a number of new areas to explore. Oasis is the starting location and becomes available to players when the DLC is installed. Fast Travel is also available in all areas with the exception of the Lair of The Leviathan.

And some new heads and skins to boot!