Captain Scarlett, originally from the planet Eunomia, is the titular NPC and the main antagonist of Captain Scarlett and Her Pirate's Booty, the first DLC for Borderlands 2. She seeks a treasure and already knows where to find two of the four compass pieces needed to locate the treasure. Being a pirate, she is extremely untrustworthy, and attempts to betray the Vault Hunters. Ironically, she also suffers from an honesty streak as well, blatantly telling her enemies of her treacherous intents. The few times she had been truly deceptive were often revealed to be result of her forgetfulness.

After hearing about Captain Blade's treasure, Scarlett and her friend Sandman commandeered a ship out in Wurmwater. They then found two out of four pieces of a compass that would point the way to the lost treasure. Scarlett then betrayed Sandman by trying to literally stab him in the back to get his compass piece, but he escaped and began building a new pirate gang to take down Scarlett. Scarlett had a third compass piece almost in her grasp when her shipmate Herbert had one in his possession, although lost this as well when she kicked him off her crew because, aside for his sexual advances, he had been stalking her.

After pursuing a lengthy and fruitless quest for the lost treasure, Scarlett met the Vault Hunters and set them to the task of recovering the compass pieces instead. When this was accomplished, she directed them to Magnys Lighthouse to see where the compass would lead. It revealed a secret location in the desert sands, but instead of sending the Vault Hunters to the site, she went herself and dispatched a portion of her crew to finish off the Vault Hunters.

At Scarlett's moment of triumph however, the treasure's guardian, the Leviathan, rose up out of the sands and swallowed her whole. Even more surprising to her was the fresh arrival of the Vault Hunters, who had followed her and had likewise been swallowed. Scarlett fought them in the belly of the beast riding her pet Rakk Hive Roscoe, who was swallowed by the Leviathan during her search for the lost treasure, but he was killed and she ultimately conceded defeat and fled the scene via personal teleporter. As she fled she left parting words saying that they would meet again soon. 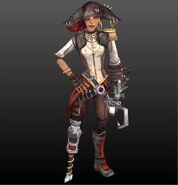 Add a photo to this gallery
Retrieved from "https://borderlands.fandom.com/wiki/Captain_Scarlett?oldid=471017"
Community content is available under CC-BY-SA unless otherwise noted.