Candlerrak's Crag is a location featured in Sir Hammerlock's Big Game Hunt in Borderlands 2. It is a high, craggy region full of sheer rock walls and deep chasms. Savages occupy the area and have roughly hewn steps into the stone in many parts of the precarious terrain.

Big Bluff is a high rocky shelf that is home to Rouge. The open grassy field is dotted with a few giant footprints, and there is a discoverable vault symbol on the cliff wall adjoining it. A small platform protruding out from the ledge holds a red weapons chest.

Elite's Crossing is a rope bridge spanning a deep chasm. It features briefly as a choke point where several Elite Savages conduct an ambush during the mission The Fall of Nakayama.

Lower Bluff is a small shelf beyond Elite's Crossing that is home to Bloodtail. There is a red weapons chest on a precarious platform above the bluff that can be reached by two carefully timed jumps from the cliff edge above. Falling from the planks near the access point can land a character on a narrow rock ledge with a safe drop down to Lower Bluff.

The Rage Cage is a natural arena that is home to Voracidous the Invincible. It can only be accessed by paying 8 Eridium at a switch to unlock the gate entrance. Outside is a Quick Change station and ammo dump to ensure that combatants entering the area have easy access to optimal character builds and ammunition supply. 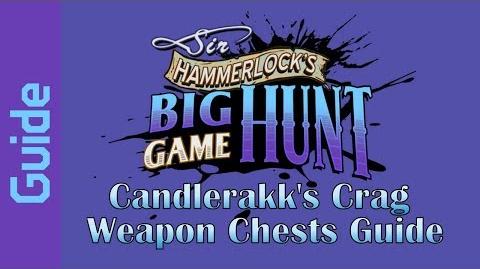 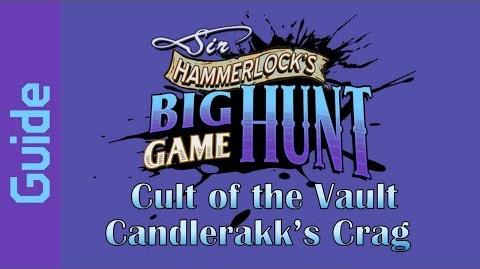 BL2 Candlerakk's Crag Cult of the Vault Guide
Retrieved from "https://borderlands.fandom.com/wiki/Candlerakk%27s_Crag?oldid=432665"
Community content is available under CC-BY-SA unless otherwise noted.