Byte Club is an optional mission in the Claptastic Voyage DLC from Borderlands: The Pre-Sequel.

This is an extremely straightforward mission, available after The Psychology of a Claptrap is completed. T13L3R requests that the Vault Hunter tells as many people as possible about an unexplained "Byte Club," via a microphone and loudspeaker set which are too high for T13L3R to reach.

Upon doing so, the Vault Hunters return to T13L3R and witnesses an argument about Byte Club rules between him and 4L50-T13L3R. The two continue to take turns hitting each other once the mission has been turned in.

"This club is going places thanks to you!" 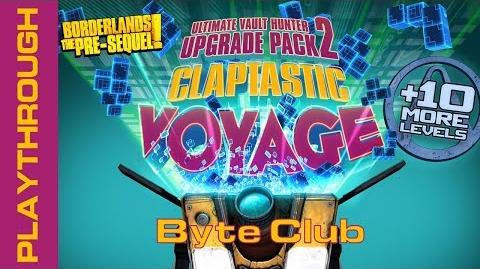