Bunch of Ice Holes is an optional mission in Borderlands: The Pre-Sequel given by Nurse Nina in Concordia.

Nina offers a mission to pick up her ice drill and take it to a cave marked on the map. Once there she offers directions to place the drill in the first location in an ice pool. The ice pools do constant damage to anyone standing in them, and while most of the placing and gathering objectives can be done safely from the edge, Vault Hunters will have to brave the icy conditions several times.

With the drill in place, shugguraths and rathyds will arrive and attack. They are resistant to cryo damage, but the shugguraths are vulnerable to attacks to their eyes, and the rathyds are fairly weak creatures. There are three shugguraths that appear in sequence and killing these completes the mission's bonus objective.

The second drill placed is uneventful, but the third awakens a giant shuggurath that must be killed in order for the drill and ice core to be recovered. Again, critical hits to the eyes hastens its demise, and this time there is room to hang well back and attack it purely from long range.

The mission can be turned in to either B4R-BOT or Nina. B4R-BOT offers the Too Scoops shotgun as a reward, while Nina offers the Ice Scream assault rifle.

"Limb check! Nothing froze off, right?"

Turn In: Nurse Nina or B4R-BOT 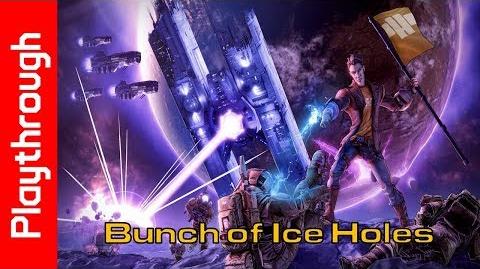 Bunch of Ice Holes
Retrieved from "https://borderlands.fandom.com/wiki/Bunch_of_Ice_Holes?oldid=416640"
Community content is available under CC-BY-SA unless otherwise noted.