As the Berserker, he is able to effectively use explosive weaponry and powerful melee attacks to decimate his foes, as well as endure more overall punishment from enemy attacks. Brick is able to enter a rage state "Berserk" to improve his melee strength and regenerate health for a short time.

Brick is originally from the planet Menoetius and is one of the original four Vault Hunters who sought to uncover the Vault hidden on Pandora. In addition, Brick is one of the founding members of the Crimson Raiders. However, Roland had expelled Brick from their base of Sanctuary after his brutal killing of Shep Sanders, who had disclosed New Haven's location to Hyperion, which led to its destruction by Handsome Jack's forces. Later on, Brick decided to become a bandit, after Hyperion began treating him as such. He then formed the Slab gang. With himself as the leader, Brick became known to most of Pandora as the "Slab King."

After gaining the Claptrap upgrades, Roland tells the Vault Hunters to go to Thousand Cuts to gain "The Slab King's" assistance. When Brick's bandits reveal the Vault Hunters aren't from Hyperion, he decides to initiate them into his gang. After passing his test (which consisted of surviving waves of attack from Brick's own bandits), he welcomes them into the gang and agrees to assist them with the Hyperion Bunker. At that moment, Brick's territory is attacked by Hyperion forces, and Brick fights with the Vault Hunters to repel the attack. Afterwards, he returns to Sanctuary, where he will then give out side missions.

During the assault on the new Vault Hyperion discovered, Mordecai commands a captured barge carrying Brick. Both of them help the Vault Hunters through the first gauntlet of Hero's Path, until the barge is targeted by a Moon Blitz. Brick jumps back into the barge, which is then struck by the Blitz and crashes into the lava. However, the two survive the crash and make it to the Vault, and witness the activation of the map showing the locations of the many other Vaults scattered throughout the galaxy.

In Episode 3 of Tales from the Borderlands, Brick and Mordecai are hired by the gang lord Vallory to apprehend Athena, who was once allied with Handsome Jack. The two of them duel against Fiona and Athena which resulted in Fiona shooting him in the foot They might have been killed had Vallory not intervened. After knocking Athena out with a rocket launcher, the two Vault Hunters then take her back to Sanctuary.

In Borderlands: The Pre-Sequel, Brick is seen in the introduction alongside Mordecai limping away after Lilith noted how it took the two to capture Athena. In the final scene, Brick raises his objections, along with Mordecai about executing Athena to Lilith. Despite this, Lilith went ahead and ordered the Crimson Raider soldiers to execute Athena, only for the bullets to be stopped by The Watcher.

In Borderlands 3, during the mission Hammerlocked Brick, Mordecai, Tiny Tina, and the Vault Hunter are hired by Wainwright Jakobs to rescue Sir Hammerlock. Brick's callsign during this mission is Meatslab.

Brick's Action Skill is a Berserk mode in which the screen goes red, he holsters his weapon and proceeds to attack with his fists. During this time, Brick also gains resistance to all damage and his health will regenerate at a rapid rate as he beats down enemies. Brick's berserk mode is controlled with the analog sticks and by using the 'aim' button for a powerful but slower left hook and the 'shoot' button for a quicker but weaker right jab. His Berserk mode is upgradable via the skill tree. Several of his class mods are also dedicated toward improving effectiveness of Berserk, and can make it a viable primary method of combat.

Brick is an optimal character for close combat. He is well equipped to use shotguns and explosives, and is also a very potent brawler with his fists when he slips into a berserker rage. Some say he is best played as a tank or brawler, as he has talents that reinforce him to withstand harm, empower his brawling capabilities and aid any explosive weaponry that he might use. His default melee weapon is a pipe. 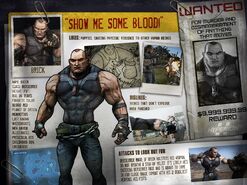 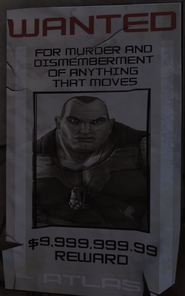 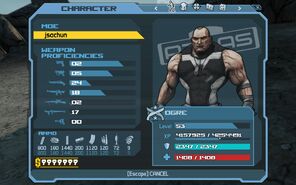 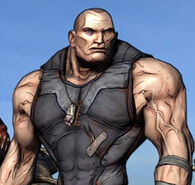 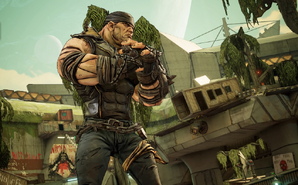 Brick as he appears in Borderlands 3