The majority of tweaks are made in configuration files, which have a .ini extension. Due to this, they are often referred to simply as INIs.

These files are stored in:

This folder contains the following files:

The files that most tweaks are made in: 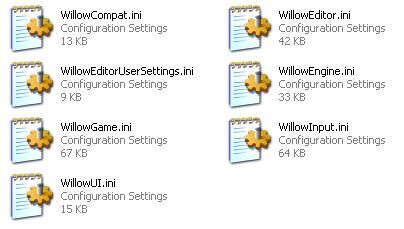 These tweaks will be reversible only if the .ini files are backed up.

When joining a game, you may be sent the ini files of the host. This is one reason it is best to make the files read-only once you have edited them. Any tweaks that have permanent effects on your save file will be noted with a star (*)

This is important: Start Borderlands 2 at least once before tweaking for the first time. Go to Options, and change a control - any control. This is necessary to build a binding list in WillowInput.ini

Next, back up all configuration files.

Finally, make sure all file extensions can be seen.

Each tweak will be under the corresponding category, and will begin with the file to be edited. If there is a relevant forum thread, it will be linked as well.

Any line of an ini file will be disabled by putting a semicolon before it. An example of this is in the startup movies tweak.

Will have black lines in between tiles unless vignette shading is turned off. Only way to take over-resolution shots with black outlines still turned on would be to run the whole game in a scaled resolution.

the first number is the multiplier of the current game's resolution, e.g. how many tiles will be put together

The second number is the tile overlap in pixels. Each tile actually overlaps a little bit to ensure that fullscreen blurring or distortion post-process effects will match. The default value is 64 pixels. For instance, if you're using a post-process effect that blurs a lot, you may want to increase this parameter.

Follow the instructions for enabling developer console, then in the game press either console or typekey and type:

(default is 90, it is 70 on consoles and was in Borderlands 1 - this is also editable in the game settings now)

(Screenshot comparison between the 3)

Replace "0" (Infinte) with the desired number of particles processed in real-time, for example:

Open up your text editor of choice and open the following directory:

Open the folder of your language. Search for the file gd_challenges.XXX (the tripple X stands for the language, e.g. DEU for German language) and open it with the editor. There are all bonusses listed, e.g. Elemental Effect Chance:

To prevent from line wrapping you will edit the line that says "RewardString". There you can use HTML to effect the text displayed in the game. Use the following code to alter the string:

The X determines the font size. 15 seems to be the standard chosen by the devs. Alter the size by trial and error until you'll find the best one.

Use this application, which will help you manually set your mouse sensitivity.

Retrieved from "https://borderlands.fandom.com/wiki/Borderlands_2_PC_Tweaks?oldid=472034"
Community content is available under CC-BY-SA unless otherwise noted.