The Borderlands 2 $100,000 Loot Hunt was a promotional in-game event to mark the release of Borderlands 2: Game of the Year Edition.

Starting October 12 2013, Gearbox began a contest dubbed 'The Borderlands 2 $100,000 Loot Hunt'. The contest, going on for four weeks, was comprised of three essential parts per week: The Target, The Bounty, and The Goal. The Target for the day featured a 100% drop rate of a Bounty, with which players would have to kill a certain number of a specified enemy to complete the Community Goal. When a player killed the Target, he/she was entered into the Weekly and Grand Prize entry (prizes listed below). The sponsors of the event and of the prizes: Falcon Northwest, Nvidia, BradyGames, Sony, and Turtle Beach.

Weekly Prize Listing, as provided by the Rules:

"That’s right – we’re not done yet! You fine minions have done SUCH a great job of grabbing guns and popping uglies that we’re extending the Loot Hunt for ANOTHER WEEKEND! Which is a thing we decided to do FROM THE KINDNESS OF OUR HEARTS and definitely NOT because I accidentally delayed the START of the Loot Hunt by playing a quick game of “CATCH THE ELECTROMAGNET” with the server!" - Claptrap (posted on the official website)

A bonus weekend was added to the end of the event with a target and a bounty each day, but no supplementary community goals, apart from a gauge that would fill up from "100s" to "10s of Millions" depending on the amount of enemies killed (by US players) with the weapons provided. The text used in the blurb indicates that the extra weekend was added as a consolation for the delayed start of the event by one day.

"This weekend, you can kill anything. Yes, ANYTHING! No matter what you shoot in the face – be it beast, man, robot, or kitten — so long as you use each day's special weapon, your kills will count toward the weekend community goal! Please don’t actually kill kittens." - Claptrap (On the Bonus weekend challenge).

The weapons below were the community rewards, granted to those who contributed to the Community Goal if all the week's goals were met. Some weapons, like the Creamer, were unavailable to those without the proper DLC, but received a temporarily increased drop rate to all players who met the requirements, DLC owned or not. 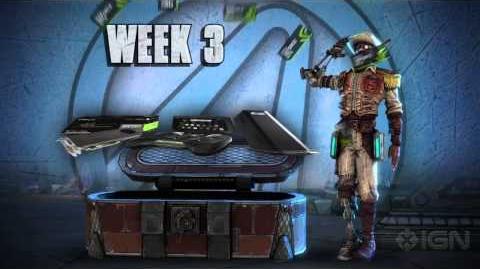