Boomshakalaka is an optional mission in Borderlands: The Pre-Sequel.

Once the mission has been accepted from Tog, the first objective is to recover a ball nearby. This is by a hoop near some structures, and when it is approached a door will open to reveal two Lunatics. Killing them is purely voluntary and has no bearing on the progress, but may make recovering the ball easier.

Once the ball is in hand it can be returned to Dunks Watson, who then proceeds to attempt a record breaking slam dunk. Once he has accidentally cleared the gravitational pull of Elpis the mission is turned in to Tog.

"That was a slam dunce! Your turn!" 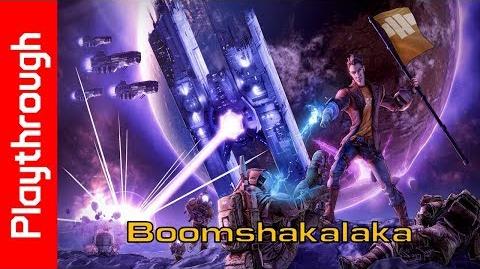 Boomshakalaka
Retrieved from "https://borderlands.fandom.com/wiki/Boomshakalaka?oldid=416646"
Community content is available under CC-BY-SA unless otherwise noted.