For the Borderlands: The Pre-Sequel mission, see The Beginning of the End.

Beginning of the End

Beginning of the End is a location-based challenge in Borderlands 2. To perform this challenge in Arid Nexus - Badlands, it is required to collect five ECHO recordings explaining what happened to Fyrestone during the time gap between the two games. It is worth 1 Badass Rank.

The ECHOs appear to be recorded in a partially-chronological order.

Dr. Zed: Hey, Roland! It's Zed. Thought you might like to know, some guy from the, uh, Hyperion corporation came by - name of Blake. Said you dealt with him during the Claptrap uprising. Anyway, he offered me a pretty penny for my place here in Fyrestone. Was real insistant that I take the money and run. It's probably nothin', but there was just somethin' about him that put me on edge, y'know? I'ma stay here in the meantime, though - I ain't in no hurry to leave my shop.

Handsome Jack: Angel, get this message to whomever's organizing construction out in the Nexus. No matter what happens, make sure that old bandit town - Fyrestone, I think it's called - make sure it stays standing. That pissant little rest stop is where it all began. Oh, and another thing: I want it on company policy that instead of Fyrestone, we're changing its name to Jackville. Really twist the knife for those bandit bastards, you know what I mean? I want those Vault hunting sons-of-bitches to see what I've done with the place - I want it to stand as a testament to their failure. They couldn't protect New Haven, they couldn't protect Fyrestone, and they're sure as hell not going to protect Sanctuary.

Dr. Zed: Roland? Zed. If you're receivin' this, respond as soon as you can. Blake came back again today and showed me some faked pictures of New Haven - the city was burnin, lotta people were dead. Blake said his boss burned the place to the ground when everyone livin' there wouldn't move out. Course, I know those pictures had to be faked cause you and the rest of your pals were holed up in New Haven, and you woulda stopped those troops from takin' the town, right?

Handsome Jack: Guys, I've heard rumblings amongst the workers that our Eridium mining operations are 'ravaging' this planet. Ya know, I assume you're saying this because most of you didn't see what Pandora looked like before we showed up. You know what they called this place? The Badlands. It was a dry, dusty pisshole where dreams went to die. Now there's pipes, full of beautiful Eridium, technologically advanced machines, goddamn volcanos - I mean, who doesn't love volcanos? They're mountains that explode fire. That's literally the definition of the word awesome. Am I - am I right?

Dr. Zed: Heya, Roland. I appreciate your offer to move into Sanctuary, but I've got a lot of stuff here in Fyrestone. Sanctuary sounds nice and all, but... Fyrestone's my home. I made my decision - if I'm gonna die, I'm gonna die in the city I was born - Fyresto--
Hyperion Bot: Attention, citizen of Fyrestone: die. (sounds of weapons being drawn are heard)
Dr. Zed: Aw, piss. (sounds of gunfire are heard) On second thought, Roland - when's the soonest you could come pick me up? 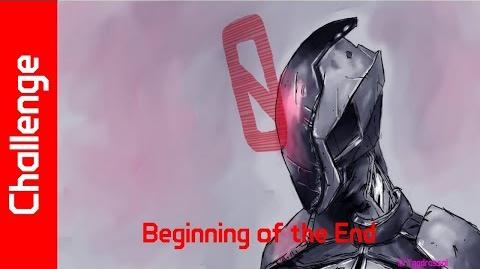 Beginning of the End
Retrieved from "https://borderlands.fandom.com/wiki/Beginning_of_the_End?oldid=437151"
Community content is available under CC-BY-SA unless otherwise noted.