Battle: Twelve O'Clock High is a story mission in Mr. Torgue's Campaign of Carnage given by the Forge Battle Board. The mission is performed in The Forge.

It begins a series of missions "Twelve O'Clock High".

"As it stands, Flyboy has no reason to fight you - he thinks he's invincible, and he's more focused on taking out Piston than scuffling with lower-ranked fighters than you."

This mission has a timer of 5 minutes. In this time frame players have to shoot Cargo Buzzards that fly overhead to make them drop Flyboy's bling. The buzzards do not have to be destroyed, but only damaged enough to drop their cargo. Escort Buzzards will fly around and protect the Cargo Buzzards during this time. All of the buzzards have to be destroyed to complete the mission, but they will keep coming until five pieces of bling have been collected.

An optimal strategy is to shoot as much cargo off Cargo Buzzards as possible and collect it, while evading the Escort Buzzards. Once the samples are collected, the remaining Escort Buzzards must be destroyed to complete the mission.

"Flyboy's Buzzards are dead, and he's pissed - so pissed, in fact, that he's invited you into his lair so he can kill you personally."

Turn in: Forge Battle Board 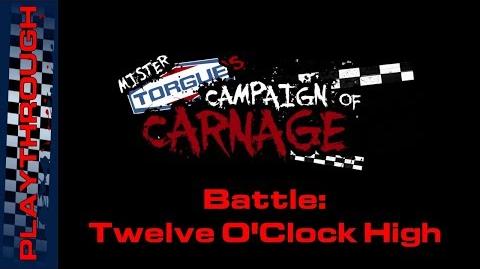