Welcome To The Jungle

Battle: Appetite for Destruction is a story mission in Mr. Torgue's Campaign of Carnage given by Arena Battle Board. The mission is performed in Torgue Arena location.

This mission begins a series of missions "Appetite for Destruction".

The arena in which the combat takes place is a wide circular area with numerous crates around the periphery for cover, and several ammo digistructors. The fight commences only once the Vault Hunters have assembled in the middle, so there is time to skirt around the area for these ammunition pickups.

Once the fight is started, by moving to the circular metal grill in the middle, it becomes a death match against several successive waves of assorted bikers. The combatants are mostly hostile to each other, and will score the majority of the kills if left alone, but this also endangers the chances of gaining a Second Wind, thereby raising the importance of keeping to cover near the edge of the arena.

"You've survived the Appetite for Destruction and are now 5th biggest badass in the tournament! Your sponsor, Piston, rewarded your hard work with a weapon chest." 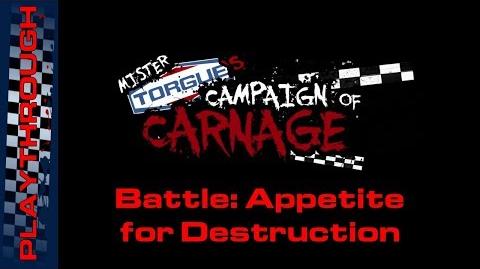 Battle Appetite for Destruction
Retrieved from "https://borderlands.fandom.com/wiki/Battle:_Appetite_for_Destruction?oldid=426557"
Community content is available under CC-BY-SA unless otherwise noted.