"One of the bandits is breathing his last few, ragged breaths. He opens his hand, holding what appears to be a strongbox key. He wheezes, 'Find brothers... two more... keys... Lance get nothin' He coughs and then lies still." 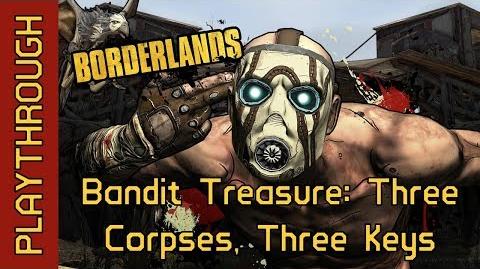 Search Old Haven for keys and a locked strongbox.

In Old Haven are some bandit corpses strewn about in front of a wall near a water tower. One of them holds a journal which gives clues to a hidden bandit treasure trove.

More keys are scattered around several locations in Old Haven. It is advisable to do this mission in tandem with Smoke Signals: Shut Them Down and pick up the keys between the smoke signal objectives. The first key is conveniently located right next to the journal. The second key is in the north of the area and the third key can be found beyond the canal to the west.

Reaching the keys involves passing through Old Haven's contingent of Crimson Lance soldiers. Corrosive weapons are very effective here and the urban environments near the keys provide opportunities for both long range and close combat.

"The three keys open the strongbox. Inside, you find some sort of map. The map marks a location in the Dahl Headland. Perhaps something is hidden there?"