This article is about Bandit manufacturer. For other uses, see Bandit.

Bandit is a new manufacturer introduced in Borderlands 2.

Bandits are prolific manufacturers of weapons and vehicles on the planet Pandora. In the five years between the events of Borderlands and Borderlands 2, the bandits have begun to produce their own vehicles and "jerry-rigged" their own weapons, grenades, class mods and shields.

Bandit weapons have huge magazine sizes, typically larger than that of other manufacturers (a trait also held by the former manufacturer S&S Munitions). However, their guns also feature generally longer reload times and the stats of their weapons are below average.

As bandit weapons are made out of salvaged materials, most have a red/rusted appearance and are constructed with makeshift parts like tape and steel banding. Fitting with their large magazine sizes, bandit guns also feature unconventionally huge gun magazines, which are most noticeable on their pistols and SMGs: pistols of green quality and above use miniature double-drum magazines, while SMGs feature a box magazine on each side of the weapon, which are detached one after the other upon reloading.

Pre-release images of bandit-made weapons featured "rough and ready" parts such as the use of bolts and nuts as iron sights and glass bottles used as scopes. These features were largely abandoned in Borderlands 2's final release version. Some bandit-manufactured weapons do feature a bent, vertical screw in the place of a rear iron sight.

The names of most bandit weapons often have poor grammar and spelling (e.g. "Shooty Mashine Gun" and "Bulets Go Fasterified Acurate smgg"), reflecting on the general literacy of typical bandits.

The following are items made by bandits. 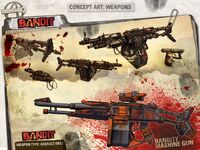 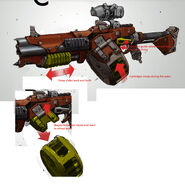 Design of the Bandit-made shotguns

Concept of a Bandit-constructed shield 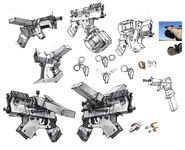 Retrieved from "https://borderlands.fandom.com/wiki/Bandit_(manufacturer)?oldid=434653"
Community content is available under CC-BY-SA unless otherwise noted.