Badass Spiderant Corrupters are very large spiderants and are recognizable by bright green color of their carapaces and abdomens.

Badass Spiderant Corrupters are similar to Spiderant Soldiers in that they prefer attacking from a distance, launching numerous small projectiles or a blob that explodes similarly to a grenade, except their attacks cause a corrosive effect. If a Vault Hunter gets too close to them, then they will slam the ground, emitting a powerful corrosive shockwave which has high knockback.

Their elemental attacks pose less threat than their incendiary and shock cousins, but the corrosive damage they deal can soften up a Vault Hunter for attacks by other Spiderants, especially Soldiers. Their abdomens are very large, and can be easily shot when they fire their corrosive needles. 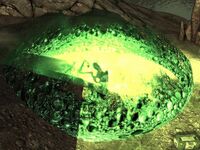