Badass Skags are tough opponents, with high health, significant damage reduction, and powerful attacks. Additionally, all Badass Skags employ a body slam against the ground that creates an area-of-effect shock wave with a knockback effect and even an elemental effect if the skag has an element type. Badass Skags are unique among all skags for having glowing blue eyes.

Lacking an elemental effect for ranged attacks, non-elemental Badass Skags are very likely to engage a player in close combat. Elemental Badass Skags attack mostly from medium range by spitting elemental attacks at their targets. A short ranged spray of fire over a wide area; a single arcing bolt of electricity that bursts and causes splash damage on impact; or a medium ranged stream of acid that deals a lot of damage in seconds. They will try to stay away from close combat, retreating if enemies get too close. 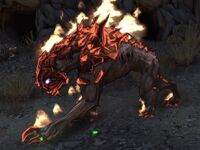 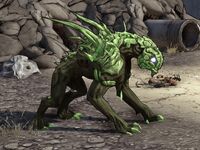 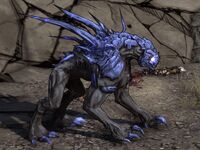