Badass Nomad is an enemy. He is a stronger version of nomad taskmaster and is distinguished by spikes on his shield.

In Borderlands 2, Badass Nomad is only encountered in areas controlled by the Bloodshot and Sawtooth clans.

Aside from using assault rifles, Badass Nomads can also unleash a powerful shield bash when in melee range. Sometimes Badass Nomads will give orders to the other bandits in the area, improving their combat effectiveness but potentially letting alert Vault Hunters prepare for the imminent shift in tactics. While issuing orders, Badaass Nomad will put his shield aside opening himself for easy shots. 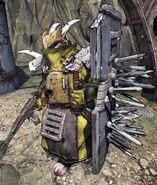