This article is about an enemy in Borderlands 3. For other uses, see NOG (disambiguation).

Badass NOGs play an active role on the battlefield, not only by supporting their fellow Maliwan troopers but by actively attacking any enemy targets in the area as well. They have 12 drones that can keep shields of several combatants replenished while at the same time firing at any targets nearby. Badass NOGs use these drones, sometimes in packs of up to six, as grenades. They can also produce an additional 12 drones forming a sphere that homes in on a target and causing considerable damage on impact. They can also send out series of two drones that are spaced apart with an electric arc between them. On contact, this arc can take out a considerable portion of the target's shield. Badass NOGs will replace any destroyed drones.

Badass NOGs are equipped with strong shields, so stripping them down with a shock weapon is a primary objective. Once they lose their primary shields, they will form drones in a circular pattern projecting a forcefield in front of them. This forcefield will not only deflect most of the incoming bullets but will fire at the attackers. Because of the impact they make on the battlefield, Badass NOGs should be taken out as quickly as possible. Despite their small stature, they are fairly slow to turn around. Vault Hunters can take advantage of this by jumping over the Badass NOG and shooting the device on its back which is a critical point, several well-placed hits will do the job. 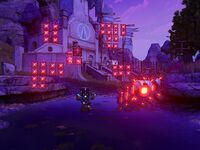 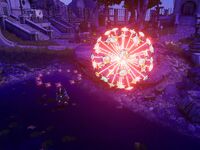 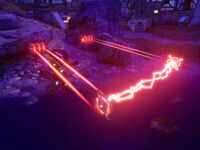 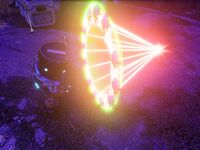 Retrieved from "https://borderlands.fandom.com/wiki/Badass_NOG?oldid=459891"
Community content is available under CC-BY-SA unless otherwise noted.