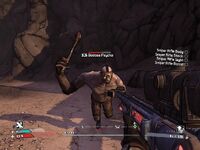 A Badass is an elite version of a regular enemy. In addition to having the word "Badass" preceding their names, they can also be distinguished by their glowing eyes, increased size and other artistic deviations like spiked armor. They are not named foes and should not be confused with bosses.

Badasses are tougher than normal enemies as they take and deal more damage (the Badass Psycho being an exception in damage compared to non-badass variants). Human badasses are often equipped with extremely powerful weapons, shields and grenade mods and act similarly to their non-badass variants, such as Badass Raiders taking cover frequently while Badass Bruisers simply charge towards the Vault Hunter. Crimson Lance badasses have additional armor plating on their shoulders which blocks all damage.

With the exception of Badass Skags, all badass creatures are imbued with corrosive, incendiary or shock attacks, which causes their damage to fluctuate depending on what they are fighting and also gives them high resistance if not outright immunity to those attacks. Badass creatures also have different attacks, some of which that can deal incredibly high damage regardless of resistance. These elementally imbued creatures also have a chance of dropping artifacts corresponding to the elemental affinity when killed.

Although they are much harder to kill, the experience they give and the above average loot they can drop generally makes killing a badass more rewarding than killing regular foes.

Spiderant Queens, though not possessing a Badass title, are considered Badass enemies.

When Playthrough 2 becomes active, badasses will be replaced by the considerably more powerful BadMuthas, and will spawn more often. They are similar to a badass in most aspects, but compared by level (say a 30 Badass vs. 30 BadMutha) are more powerful.

In Borderlands 2, most enemies have badass variants with of up to 5 badass levels. Between badass levels, appearance and combat style may vary as they gain additional abilities. All badass enemies will become more powerful with each rank and can quickly become overwhelming if not eliminated quickly. Goliaths will only receive increased health and damage output, while varkids and savages additionally gain new abilities.

Few enemies may also appear as chubby, which is a especially rare and powerful kind of an badass.

Certain enemies in Borderlands 2 can evolve during the fight, namely the goliaths, varkids, and savages. Their final evolution, or Supreme Ultimate Badass rank, possesses a unique name and is usually much bigger than their evolutionary precursors. They can only spawn in True Vault Hunter Mode or Ultimate Vault Hunter Mode. Badass Savages from the Sir Hammerlock's Big Game Hunt DLC need a nearby Witch Doctor to evolve. Varkid metamorphose to the next badass rank after a short time in a cocoon-like varkid pod, during which they are defenseless.

After evolution, enemies will fully replenish their health and increase in level. They will also have increased experience points and loot rarity (loot level does not increase according to their level). Goliaths will triple any enemies' experience they killed and add to his own, which can result in tremendous amounts of experience points, especially if an enraged goliath killed another one that had already killed a few enemies, which technically multiplies the XP of the latter's kills by nine.

The fifth evolution level of goliaths, varkid and savages, namely GOD-liath, Vermivorous the Invincible and Omnd-Omnd-Ohk , will be very difficult and time-consuming to kill. If a player team is wiped out, they will be restored to full health. Like other unique enemies, they have a chance to drop specific legendary items.