The Badaboom is a legendary rocket launcher manufactured by Bandit. Badaboom is obtained randomly from any suitable loot source but has an increased chance to drop from King Mong located in Eridium Blight.

Multi-kill. – Fires a cluster of six rockets at the cost of one rocket ammo, each rocket with slightly reduced damage. Greatly reduced accuracy.

In terms of damage-per-shot, the Badaboom's potential eclipses that of most other launchers, including the formidable Nukem. This is because it fires six rockets for the cost of one. These rockets spread in a manner similar to a shotgun's projectiles, making it very useful for inflicting high amounts of accumulative damage to large targets, or spreading heavy splash damage to large groups of smaller targets, and it can be very handy for attaining Second Winds. 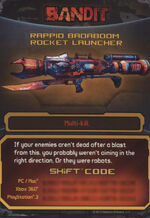 Retrieved from "https://borderlands.fandom.com/wiki/Badaboom?oldid=385744"
Community content is available under CC-BY-SA unless otherwise noted.