When I'm good, I'm very good... – Always corrosive. +70% critical hit damage. While wielding this gun, any damage done by the character heals them at a rate of 2% of the damage inflicted.

The Bad Touch is an extremely powerful variant of the Maliwan Venom submachine gun, with a high base and elemental effect damage. It is a particularly good weapon for Siren builds, since their class mod bonuses to submachine guns and elemental damage serve to make the already powerful weapon even better. While the corrosive element is only usable against armored enemies, it is more effective at such purposes than most other SMGs.

The gun as seen in third person 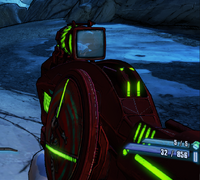 Bad Touch in first person
Add a photo to this gallery
Retrieved from "https://borderlands.fandom.com/wiki/Bad_Touch?oldid=474002"
Community content is available under CC-BY-SA unless otherwise noted.