Who's a widdle gunny wunny!!!  – Thrown weapon spawns a "child grenade" upon exploding, an identical but smaller version of the original gun that explodes again. Very rarely it will spawn a second or third projectile.

When the reload projectile detonates from hitting an enemy directly, the child grenade will often have a trajectory into the same enemy and will immediately explode upon spawning. This immediate second explosion occurs often, doubling the explosive damage, with a rare chance additional damage if a second or third child spawns. As Tediore reload damage is based on weapon damage and bullets left in the weapon as it is thrown, the damage can be greatly enhanced by skills and equipment that increase magazine size, alongside its already substantial capacity. Shooting a single bullet, reloading, and repeating rapidly can yield immense damage, severely damaging or even outright killing bosses or badass enemies. While this can lead to huge damage, it consumes significant ammo, making it difficult to keep up without large ammo regeneration or frequent restocks. 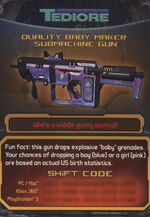 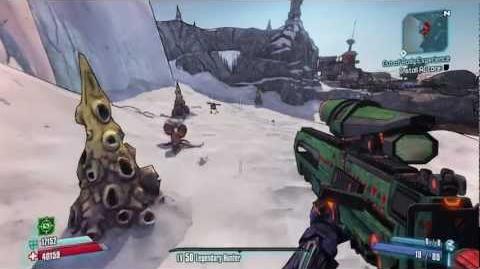 Borderlands 2 - How to farm Babymaker and Developer's Chest
Retrieved from "https://borderlands.fandom.com/wiki/Baby_Maker?oldid=461284"
Community content is available under CC-BY-SA unless otherwise noted.