Where Angels Fear to Tread Part 2

BFFs is an optional mission in Borderlands 2 given by Sam Matthews. It becomes available after Where Angels Fear to Tread Part 2 is complete.

Four friends are accusing one another over who stole the money they had looted together and have caught themselves up in a Truxican standoff. One member of the group asks for help in finding the culprit. Upon accepting the mission, Marshall Friedman will make contact by ECHO, saying that only one person will state the truth and that the other three friends are lying. He requests assistance in uncovering the identity of the thief, and shooting him/her.

Only one member of the group will speak the truth; all the other members are lying. Their statements are:

There are a few ways of deducing the thief.

Each of the potential culprits is carrying something on their back. Jim is wearing a large backpack with a dollar sign on it. From this evidence one may assume that Jim is the thief.

If Jim is shot, a fair amount of money will drop from his corpse. Shooting anyone else will cause Jim to reveal that he was the culprit and run away, although the reward for the mission will be given anyway.

"You defused a tense situation." 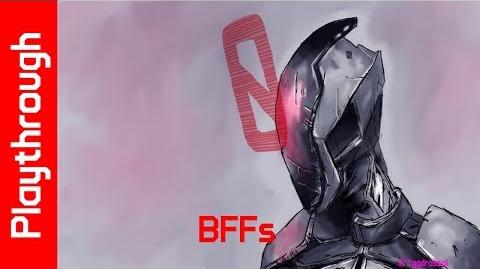 BFFs
Retrieved from "https://borderlands.fandom.com/wiki/BFFs?oldid=437913"
Community content is available under CC-BY-SA unless otherwise noted.