Athena is an NPC in The Secret Armory of General Knoxx, and is the "Gladiator" class playable character in Borderlands: The Pre-Sequel. She used to be a Lance Assassin, even claiming to be the "top operative" of the Crimson Lance and a leader of an Omega Squad, but has since defected.

After helping the Vault Hunters take down Atlas, she traveled Pandora as a hired gun. Desperate for money, she took a job as a Vault Hunter for a low-level Hyperion programmer by the name of Jack.

Not much is known about Athena's past, other than that she was trained to be an assassin since childhood, along with many other girls her age, by the Atlas Corporation. She and all the assassins trainee are later recruited into the Crimson Lance.

At some point, during the Crimson Lance's invasion of Pandora, Athena and her fellow assassins were sent to the planet to help clear out any obstacles. Though General Knoxx was initially against the idea, he later approved of the assassins after seeing their work at cleaning up T-Bone Junction. Athena, however, had a different objective while on Pandora: searching for her long lost sister, Jess. She mentioned to Knoxx that once she found Jess, both of them would leave Pandora. However, in an attempt to keep Athena in the corps, the Crimson Lance tricked her by ordering a total annihilation on the village where Jess lived. Athena, in the midst of the confusion, killed Jess by mistake. Realizing what she had done, she turned on the Lance and got "stabby" according to Knoxx. She was then imprisoned but later escaped, vowing vengeance on the Crimson Lance, as well as the Atlas Corporation.

Athena realizes the goals of the Vault Hunters are aligned with her own and contacts them when they first enter T-Bone Junction, to propose an alliance. Her identity is initially masked, with her being referred to as an "Atlas informant". Her first errand sends the Vault Hunters to see Scooter for further instructions. Scooter reveals that Athena is hiding in Moxxi's Red Light, but upon arriving there the Vault hunters learn that Athena had been kidnapped by Mr. Shank, who plans to turn her over to the Crimson Lance for the bounty on her head. The rest of the DLC involves them destroying the Crimson Armory and killing General Knoxx.

After Knoxx's death, Athena wandered Pandora searching for jobs. Eventually, she was given an offer to go find a Vault on Elpis, from a Hyperion programmer named Jack. She then joined three other Vault Hunters: Nisha, Wilhelm, and Claptrap, on a spaceship headed for Helios, Hyperion's moon base.

After opening the Vault on Elpis, Athena, disheartened by Jack's greed, throws away all the money Jack gave her for her service and moved to Hollow Point with Janey Springs (As seen in the game credits). Low on money, she reluctantly took another job from Handsome Jack before leaving again.

Athena was eventually captured by Brick and Mordecai and brought to Sanctuary. Lilith questions her about her involvement with opening The Vault of the Sentinel and Handsome Jack's rise to power. After she finishes her story, Lilith orders her men to kill her. The Watcher from the beginning of the game makes a sudden appearance and saves her.

After Handsome Jack's death, Athena was still living in Hollow Point with Janey, reportedly retired as a bounty hunter. However, she came out of retirement seemingly in a bid to capture and kill Fiona and Sasha. Later it's revealed that she was actually hired by Felix to protect the sisters and during this mission she is captured by Brick and Mordecai, leading into the end scene from Borderlands: The Pre-Sequel.

Depending on player choices, Athena is working at a Skag Grill in Prosperity Junction when she is recruited by Rhys to fight the Traveler. If the player also chooses Janey and told her that Athena loved her, then the two will reveal they are getting married.

In The Secret Armory of General Knoxx, Athena appears in T-Bone Junction after being freed from Lockdown Palace in the mission Prison Break: Try Not to Get Shanked. Once there, she offers several main story missions, and some side missions aimed at hampering the Crimson Lance efforts, as well. She later watched the destruction of Fort Knoxx.

Kinetic Aspis is Athena's action skill. When this skill is activated, Athena raises her shield and is able to absorb incoming frontal damage for a short time. At the end of the duration, or by activating the skill again, Athena throws her shield, dealing base damage plus double the absorbed damage if an enemy is hit. 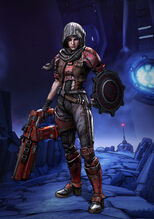 Athena, as she appears in the intro of Borderlands: The Pre-Sequel 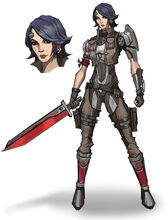 Athena Then and Now