Ardorton Station is an area in Sir Hammerlock's Big Game Hunt for the first time becomes accessible during the story mission A-Hunting We Will Go.

Finding a way over the back fence of the area will lead to an outhouse for loot, and one of the three assistants for the Horrible Assistants badass challenge.

Bone Metal Camp is the first building of the Ardorton Station complex, and is inhabited with Savages. One exit leads into an enclosed grassy area populated with Swamp Skags while the other leads deeper into the complex.

The Infernal Machine is an area in the north-east of Ardorton Station cut off by a door. It is home to one of Nakayama's foul creations, Woundspike. A short stairway down in the back corner conceals a weapons chest and a discoverable vault symbol.

Iron Rail Rotunda, in the eastern end of Ardorton Station, is an open grassy enclosure lightly populated by scaylions. A Fast Travel station and two vending machines occupy the most eastern reaches and provide quick access to a connection point to Hunter's Grotto.

The Morgue is a building adjacent to The Psycho Surgery. One of the walls is covered with chambers where bodies of Professor Nakayama's unfortunate test subjects are kept.

The Psycho Surgery is a small building located to the right of the entrance to Skin-Chop Chop-Shop. Although now abandoned, signs of Professor Nakayama's experimentation are still visible.

The Offal Overlook is located in northern-most part of the complex. Fairly large number of Scaylions inhabit this grassy area. Northern edge ends with a cliff offering unobstructed view of the surrounding areas. One white chest is found here.

This is a relatively large, indoor open space with basic savage spawns on the sides, and an elevated platform with stairs on the east end. 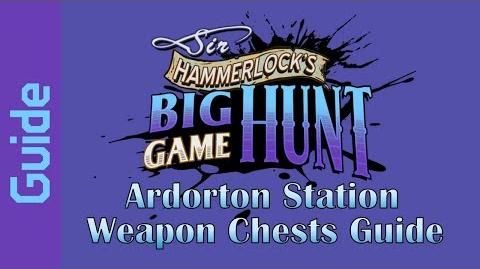 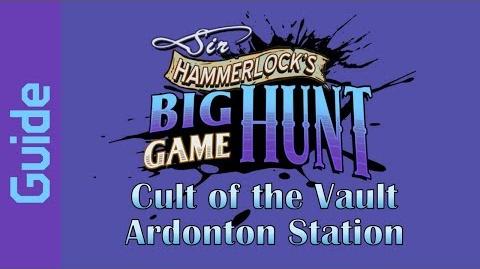 BL2 Ardonton Station Cult of the Vault Guide
Retrieved from "https://borderlands.fandom.com/wiki/Ardorton_Station?oldid=432664"
Community content is available under CC-BY-SA unless otherwise noted.