Another Pickle is an optional mission in Borderlands: The Pre-Sequel.

Pickle wants you to find his long-lost sister Eliza.

"Can you find Pickle's long-lost sister?"

This mission is available from Davis Pickle at Fingersmith Halls in Outlands Canyon. He is looking for his sister Eliza and provides her last known location, a moon buggy wreck just west of the exit from the Grabba, the Triton Flats fast travel location.

An ECHO recording retrieved from the wreck leads to Lunar Junction in northwest Triton Flats, and to a man named Abbot. A hysterical Abbot must be slapped to his senses before he will reveal that Eliza took his "flame chariot". After refusing to provide his vehicle's tracking frequency, another slap will provide the information.

Eliza can then be tracked to the Causeway in western Triton Flats, to another moon buggy, where a dead Sheila holds another ECHO. This ECHO recording reveals that Eliza has stolen Sheila's favorite rifle, Boganella, as well as the keys to a jet fighter and headed to Crisis Scar, where Shelia implores a certain Bruce to seek revenge for her death.

Eliza can finally be found at the Power Substation in Crisis Scar, where she is attempting to steal the jet fighter. Pickle asks you to help fend off three successive waves of scavs while Eliza fuels the craft. During the final wave, which includes Bruce (a Badass Outlaw), she will emerge from the jet fighter hanger and assist before flying off to meet her brother. Once the final wave is completed, the mission can be turned in to Pickle.

"The siblings have been reunited. Sort of. Nice work." 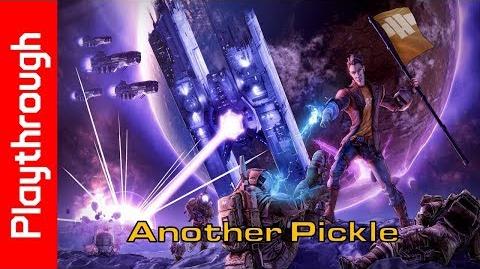 Another Pickle
Retrieved from "https://borderlands.fandom.com/wiki/Another_Pickle?oldid=416651"
Community content is available under CC-BY-SA unless otherwise noted.