An Urgent Message is a mission in Borderlands: The Pre-Sequel. Nakayama requests help to deliver an important message to Jack.

Professor Nakayama is being held captive in the Harren Lockup by Zarpedon's troops. Several guards present at the facility must be eliminated before attempting to free Nakayama from his cell. Trying to unlock prison cells using a nearby terminal raises an alarm and two waves of Lost Legion soldiers rush in to deal with the intruders. The Vault Hunters must protect Nakayama while he uploads the message. Once all of the attackers have been killed and the message sent, the mission can be turned in.

Oh wait, there's an extra word in there... love. Love life or death. Sorry about that. 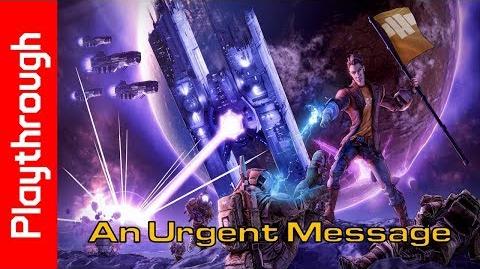 An Urgent Message
Retrieved from "https://borderlands.fandom.com/wiki/An_Urgent_Message?oldid=477990"
Community content is available under CC-BY-SA unless otherwise noted.