Amara is the playable Siren class in Borderlands 3.

A crimefighting hero born in the abysmal slums of Partali, Amara is most at home on the battlefield or in a brawl. She quickly became a local hero when she was young, once showing off by punching holes in a concrete truck. Never content to stand idly by, people celebrated when she used her Siren abilities the first time she fought a bully, and since then, she's been using her powers to smash oppressors and dismantle her foes. While in her Phasetrance, she channels her Siren energy to form powerful arms that can shoot blasts of force or crush enemies in their grip. Brash, aggressive, and self-assured, Amara doesn't let anything stand in her way, though has been torn between seeking justice and building her personal legend since her early vigilante days.

Amara's Action Skills are Phasegrasp, Phasecast, and Phaseslam. She gains additional action skills further down her skill trees, some of which completely alter their base function from the default three; she has the largest variety of action skills as a result.
Amara is able to equip one elemental augment which alters her action skill's element (with the default being shock), and an action skill augment that grants additional abilities to her equipped action skill.

Amara summons a giant fist that bursts from the ground and locks the targeted enemy in place for a few seconds. Some enemies are immune to being grasped and instantly take damage instead.

Amara sends forward an Astral Projection of herself, dealing damage to everything in its path.

Amara leaps into the air and slams the ground, dealing damage to all nearby enemies and knocking them upwards. 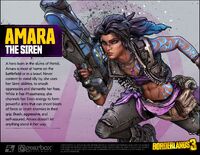