Altar Ego: Burning Heresy is the second in a series of three optional missions in Borderlands to stamp out a new religion that has sprung up among the bandit population. It becomes available on Middle Of Nowhere Bounty Board after both the previous mission and The Next Piece have been completed.

"You know Old Lynne Abbey, up on the Overlook? That place has been abandoned since we pulled out of Old Haven, but some bandits recently took the place over, and are now proselytizing and handing out pamphlets to anyone who'll listen. I doubt those nut jobs have really found religion. We need to grab some of those pamplets and find out what they're up to." 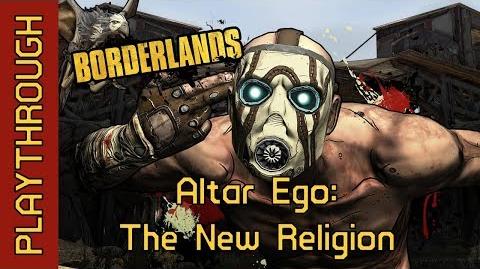 Collect pamphlets from the bandits at Old Lynne Abbey.

Old Lynne Abbey is located close to the Cauldron Fast Travel terminal. There is a revive point outside of the area. The gate to the church grounds is cracked open just enough so an Outrunner cannot pass through.

Once inside the gate, a group of bandits will ambush on the approach to the church building. Each one carries a pamphlet that will be dropped when they die, so this mission is simply a matter of walking into a gun fight and retrieving the mission objective drops.

As a supplementary reward, there is also a red chest next to a Med Vendor inside the church.

"Judging by the chicken scratches on the pamphlets, these bandits are about as literate as three-year-olds. Nevertheless, they are total zealots. Something's going on, and we need to take action before they gain a following."