Altar Ego: Godless Monsters is the third and final in a series of three optional mission in Borderlands to stamp out a new religion that has sprung up among the bandit population. It becomes available on Middle Of Nowhere Bounty Board after the previous.

"After looking at those pamphlets you collected, I'm fairly certain there's something interesting out there. Their crude drawings show stick figures gathered around some kind of monster named 'Slither'. Maybe if you kill their 'god', they'll abandon this whole religious scheme?" 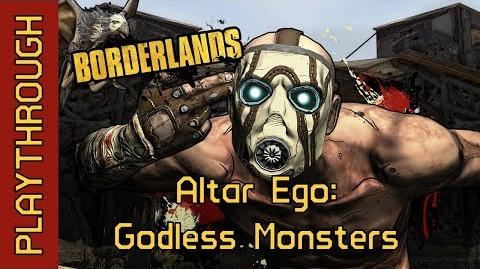 Go to the Trashy Knoll, find Slither, and kill it.

Drive over to the Trashy Knoll located at the north of the map. When the knoll is approached, a Scythid Crawler with unusually high health will emerge. Kill it, gather the loot, and return to the Middle of Nowhere for the bounty.

"This so-called 'Slither' is dead, so hopefully all of this bandit zealotry will die down. Thank you for helping in this matter."