A Role-Playing Game is the first story mission in Tiny Tina's Assault on Dragon Keep.

Soon after leaving the boat at Unassuming Docks, the sky changes to eternal night, and groups of skeletons begin to appear on the beach, some of them landing on the shores from boats of their own. The skeletons can be disposed of efficiently with long-range corrosive attacks.

The Handsome Dragon, which is invulnerable to attack, appears when Vault Hunters reach the village gate and will use a fire breath attack to cripple all characters near the gate, regardless of their level. After an out of character conversation between Lilith and Tina about making the first boss invincible, Tina will remove the dragon, revive any crippled characters, and send out a new boss, Mister Boney Pants Guy. Mister Boney Pants Guy is a midget skeleton with higher health and damage than other skeletons in the area. After he is defeated, a few more groups of minor skeletons will emerge to obstruct the way to Flamerock Refuge.

Entering Flamerock Refuge, Vault Hunters will be instructed to talk to town folks and Ellie, who then suggests talking to the gatekeeper. There are several skeletons lurking near the gatekeeper, that while initially unseen will reveal themselves when they claw their way up out of the earth. After a short talk, the gatekeeper will be swapped to Mr. Torgue, who sets a few tasks to pass the gate.

The first task is to destroy the town's two scouting blimps, which can be achieved in each case by shooting fire barrels next to the anchor points of the blimps' mooring lines.

The second task is go to the recently created town tavern, and melee two bar douches, one of them will walk out and run around the town, leading to another objective to punch him so hard that he explodes. His path is a circuit that is easy to anticipate, so he can be ambushed and struck with a melee attack when he runs past, but caution should be taken to ensure that characters are well away from any cliff edges as the explosion will send Vault Hunters some distance from the blast. An easier and safer way is simply blocking the bar exit, and melee him once prompted.

"And so the Vault Hunters proved their badassitude to the gatekeeper Torgue, ignorant of the horrors that awaited them in the darkened forest... 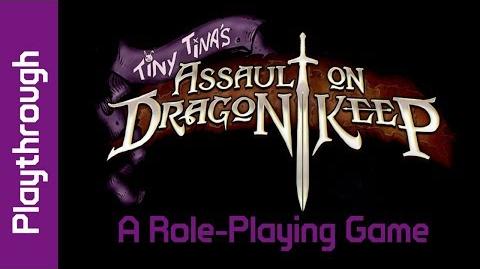 A Role Playing Game
Retrieved from "https://borderlands.fandom.com/wiki/A_Role-Playing_Game?oldid=433430"
Community content is available under CC-BY-SA unless otherwise noted.