A Montage is a story mission in Mr. Torgue's Campaign of Carnage given by Moxxi. The mission is performed, starting at Pyro Pete's Bar and continuing in Badass Crater of Badassitude and Badass Crater Bar.

Once rescued, Moxxi says to meet with her in the Badass Crater Bar for further updates. This is a much quicker trip than the one to reach Pyro Pete's Bar as there is a secondary exit near Moxxi that leads to an empty road. Jumping on some refrigerators to the right allows convenient access over a low block wall, and a short walk through an alley that leads almost directly to the Badass Crater of Badassitude connection point. Moxxi's bar is a short drive away near the race track, and clearly marked by a way point.

When Moxxi is contacted in the bar, she speaks of a dangerous opponent further up the leader board, and insists that more training will be necessary before any further advancement in the tournament rankings. To that end she tasks Vault Hunters with locating a recently hired trainer.

Back outside, another drive to the next way point leads to a pink motor home with a few pink mines protecting it. The occupant and mysterious trainer emerges from her home and is revealed to be none other than Tiny Tina.

Your trainer, as it turns out, is your old pal Tiny Tina. [Except for the "old" part, because she's, like, thirteen, and maybe the "pal" part as well, if you don't like her very much.] 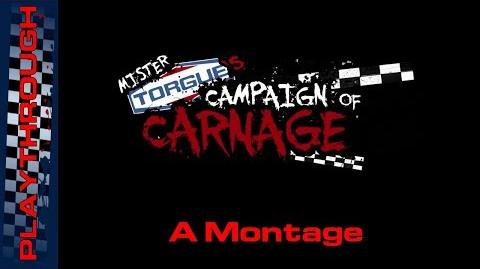 A Montage
Retrieved from "https://borderlands.fandom.com/wiki/A_Montage?oldid=414342"
Community content is available under CC-BY-SA unless otherwise noted.