A Match Made on Pandora is the only story mission in Mad Moxxi and the Wedding Day Massacre given by Moxxi. The mission is performed in the Rotgut Distillery location.

Mad Moxxi and Innuendobot 5000 explain the objective at Innuendobot's Rectory. Moxxi wants the Vault Hunters' help in bringing a truce between the warring Zaford and Hodunk clans by marrying a pair of goliaths (one from each clan), though Ellie chimes in from the ECHO saying that it will be a bad idea since two united clans will only kill them faster.

Moxxi decides to spice up the romance by mixing up a love potion, but she needs "something new, something old, something borrowed, something gold". Ellie marks the location of something that will cover half the things on the list.

Near the couple, there is also a white-colored fish in a bucket next to a fishing pole. Taking the fish and using it with the fishing pole will pull up a large Feeler Thresher named Sigmand. This is part of an optional mini-mission to fish for five unique threshers and mount their hides to open a red treasure chest (which is just across the bridge).

Ellie's waypoint goes into Moedown Motel, where the Hodunk clan is guarding the couple's baby, a Midget Goliath. The clan turns hostile once the baby is "borrowed". There is also green thresher bait in a bucket next to the baby's van, which is used to fish for a Thresher named Ikaroa.

Moxxi now needs something old, and some aged whiskey from the Zafords' The front gate is locked and a JNK Loader named Ed yearns outside for his lover Stella. Talking to Ed encourages him to bust open the gate. The Zafords will not be pleased and will attack until Ed reaches a crack in the wall and busts it open. Samples are then sipped from the caskets to locate the one that Moxxi needs.

Ed opens up a door heading deeper into the distillery, where a pot of gold sits. After following the left and heading upstairs past an Ammo Dump machine, there is a large fuel tank where blue thresher bait (to catch the thresher Moby) is hidden. As soon as the pot of gold is approached, it turns into a BLNG Loader and runs off into the distillery. It must be destroyed to drop its head and the purple bait (for catching Fire Crak'n).

The collected ingredients are then taken to the mixer, and once the love potion is mixed, the baby is left with Moxxi at the Rectory. After a trip to Love's Lookout, the goliaths are found still arguing, but once they take a sip of the love potion, their moods improve and they take off their helmets to kiss before attacking everybody in sight.

Like all goliaths, the Happy Couple will keep getting stronger as they kill more enemies, so they must be killed quickly. When one of the newlyweds is killed, the other will run up and revive them, and then they will both upgrade, so they must be killed within a very short time frame of one another or the fight will never end, and becomes harder until they reach the GOD-liath stage. Once all is done, their dropped orange bait (to summon Rue, the Love Thresher) can be retrieved and the mission can be turned in. 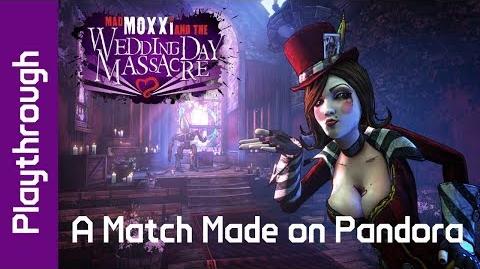 A Match Made on Pandora
Русский Українська
Community content is available under CC-BY-SA unless otherwise noted.
Advertisement