A Game of Games

A Game of Games is the final story mission in Tiny Tina's Assault on Dragon Keep. It is a multi-area mission starting at the end of the Mines of Avarice, proceeding through Hatred's Shadow and the Lair of Infinite Agony, before finally finishing with the assault on Dragon Keep.

The first stage of A Game of Games begins just inside the Mines of Avarice then continues the story through the ascent to the Handsome Tower. Initial enemies are orcs residing in the lower reaches of the area, presenting a strong case for Vault Hunters equipping themselves with incendiary weapons and being capable of dealing with targets at all ranges. The rocky canyons eventually give way to human fortifications where groups of knights are better handled with corrosive weapons, and again the open environments ensure that combat will be conducted at all ranges. Sorcerers can also be found among the knights in the upper reaches of Hatred's Shadow, unleashing potent shock attacks from within the knights' ranks.

An ambush awaits at the Hall of Hyperion, where knights of all kinds, and their sorcerer allies, pour into the chamber in waves. Defeating all of these opens the way to Handsome Bridge where the Handsome Dragon reappears, and a boss battle ensues.

The bridge is exposed to attacks from the dragon, but there is limited cover at the gate to it. By crouching down, characters can actually retreat back under the portcullis to relative safety if they need time to heal. If the character dies, the respawn point is on a ledge from which they can shoot at the dragon through the gate; weapons that fire homing projectiles can be useful here. The dragon attacks by pausing in its flight to bombard targets on the bridge with fire balls. It also periodically drops a clutch of young onto the bridge and these baby red dragons have fiery attacks of their own as well as their physical strikes. These will rarely jump up to the ledge near the respawn point. Roland again gets dropped into the action part of the way through the fight. He is able to withstand innumerable blasts from the Handsome Dragon and his Scorpio Turret provides frequent support fire.

Once inside the Lair of Infinite Agony, Vault Hunters will be forced to activate a lever while the entire group is on top of a trap door, causing them to fall into the dungeon.

The dungeon is formed with a long row of dark chambers, populated with spiders, skeletons, and wizards. Upon reaching the first lift (which is non-operational at this point), a fast travel station will appear on the right, which can be activated for easier access later. In each chamber, a switch with the appearance of a dwarven rune must be activated to open the door to the next chamber.

Characters will then enter the Chamber of Woe, which holds a puzzle corridor consisting of four platforms moving at different speeds between the ceiling and floor. Simply running over the top will ensure that a character is crushed against the ceiling, however gaps underneath the platforms also provide momentary safe zones to traverse the puzzle by a combination of running over the top and dropping underneath. The platforms have a cycle that has all four reaching the ceiling about the same time, so this provides a cue to start the run, and quick movement is essential to complete it before the platforms all line up again. At least one Vault Hunter must run through the puzzle to a lever on the other side which disables it. Being crushed will cause a Vault Hunter to respawn at the New-U station on the entrance side with the reconstruction fee.

Near the end of the dungeon, Roland will reappear and lead the way to the last boss fight area, and the Sorcerer's Daughter. When she is released, she transforms into a hybrid of wizard and spider and starts attacking. She will stay on upper area and fire spells at the Vault Hunters, often leaping down to leech health, an act indicated by the presence of green healing symbols in front of her. At times an orb will appear around her that blocks all attacks, and will only occasionally disappear, at which point she will become vulnerable. Large groups of various spiders will also emerge and attack throughout the fight. The entrance to Dragon Keep will appear when she is defeated.

Dragon Keep is primarily occupied by skeletons, but also has a few knights and wizards at various points up the ascent. Explosive damage weapons offer a universally effective weapon choice, and other elements are selectively useful on the various enemies. At the end of the spiral path around the outside of the Handsome Tower is a teleport pad that will transport the Vault Hunters to the top level to fight the Handsome Sorcerer.

The Handsome Sorcerer stands alone, and after a brief piece of rhetoric, he begins the fight. He has three incarnations, the first as the Handsome Sorcerer. In this form, he will summon three duplicates of himself and has a powerful shield to offer a combined defensive strategy of both misdirection and protection. His attacks in this form are shock based, but he is not resistant to shock damage. If the Handsome Sorcerer can be grouped together with his duplicates, area effect shock attacks can be effective in eliminating all of them.

"And so ends the story of how the Vault Hunters defeated the Handsome Sorcerer, saved the beautiful Queen Butt Stallion, and brought light back to the world. The end." 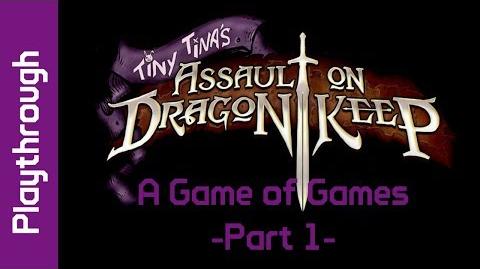 A Game of Games Pt1 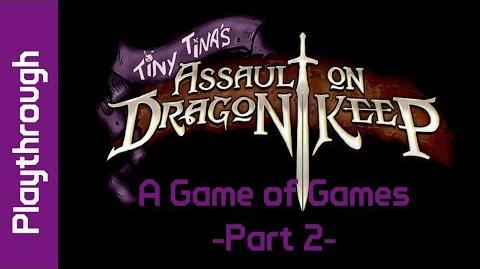 A Game of Games Pt2
Retrieved from "https://borderlands.fandom.com/wiki/A_Game_of_Games?oldid=485654"
Community content is available under CC-BY-SA unless otherwise noted.