A Bug Problem is an optional mission in Borderlands that becomes available on Middle Of Nowhere Bounty Board after Jaynistown: Secret Rendezvous is complete.

"Given the plant growth I've observed outside of New Haven, I suspect there is a component in the sulfur springs which acts as fertilizer for Pandora's native flora. To test my theory, I need samples both from The Retching Seeps and The Fetid Cauldron. I'd do it myself, but each location is guarded by a nasty spiderant! Eliminate these nuisances, and I'll be able to conduct further tests without the need for assistance." 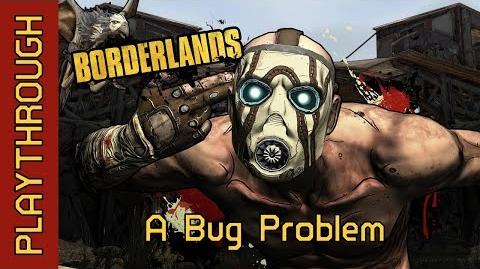 The Retching Seeps is right outside of Old Haven, by the bridge. It will be flashing green. When interacted with,it triggers the emergence of Widowmaker from the earth.

The easiest way to kill Widowmaker is to splatter it with an Outrunner. The vehicle will be heavily damaged, but Widowmaker will be dead. The next location is south of the Cauldron Fast Travel, which follows the same exact pattern as this one. Get the sample, splatter the spiderant and return to the bounty board for the reward.

Helob can be blown over a nearby cliff with the effect of Sledge's Shotgun, providing experience but not loot.

A machine gun Outrunner can be positioned so that both the main turret and the front gun are pointed at the spiderants when they erupt from the ground. Continued firing from both turrets will catch them in a cycle of stun and cause them to constantly shift back and forth, allowing easy shots to the abdomen without having to leave the vehicle or let off of the fire buttons. Exiting the vehicle to finish off the spiderants will yield maximum rewards with minimum ammunition expenditure.

An alternate strategy for those who wish to fight these named spiderants on foot is to get close to Widowmaker or Helob while positioning a large obstacle in the way of the spiderant. The intervening object will often block the spiderants from pouncing on a character and also block their ranged attacks. Proximity or contact grenades can still be used while bobbing around the obstacle to speed up damage dealing.

Because spiderants take time to turn, a quickly moving character can easily shoot at their exposed abdomens.

A good strategy for this battle is to use a corrosive weapon as the continuous corrosive damage will daze Helob allowing for easy shots to the weak abdomen.

"Excellent work! I will begin testing these samples right away. Perhaps this study will eventually lead to profitable agriculture on Pandora! Here is your reward for helping an old chemist with his bug problem."