5UP4-EG0-TP is an optional mission in Claptastic Voyage given by 5UP4-3G0-TP. It becomes available after END OF LINE is active, and 1D-TP and 3G0-TP are both completed.

This mission is picked up in The Nexus where 5UP4-3G0-TP wants your help enacting an old-timey rescue of a woman tied to train tracks by the dastardly Rex Loader.

After the Vault Hunters arrive on the scene, Rex Loader arrives in a zeppelin and spawns waves of Minions, which are Insecurity forces with top hats and large handlebar mustaches. After the Vault Hunters fight them off, Damsel DeStress complains about her predicament and rescues herself from the tracks. She reveals herself to actually be Claptrap's internalized version of Felicity - the rescue scenario being an attempt by Claptrap to alleviate his guilt about assisting in her personality destruction during Let's Build a Robot Army. She manifests as a legless, floating Felicity Rampant.

"It's easier to ask for forgiveness than permission, said some guy once." 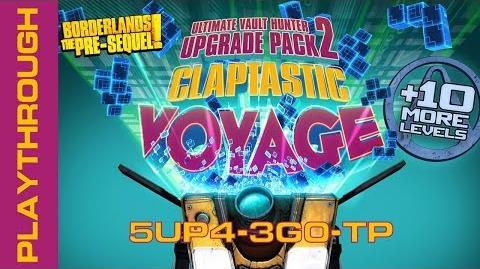